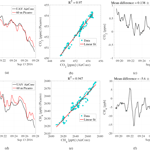 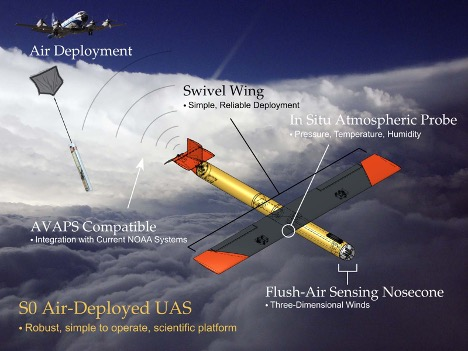 Black Swift Technologies works through NOAA and Air Force SBIR to Develop Multi-Mission UAS Capabilities NOAA’s Small Business Innovation Research (SBIR) Program was established to support innovative research projects complementing NOAA’s core mission of science, service, and stewardship. Qualified businesses are evaluated based on their degree of innovation, technical merit, and future market potential1. In 2018, Black Swift Technologies (BST) was awarded a Phase I SBIR grant, the purpose of which was to determine the scientific, technical, and commercial feasibility of a proposed air-deployed unmanned aerial system (UAS) for boundary layer observations in turbulent environments (Contract 1305M218CNRMW0059). The aircraft under consideration was named the Black Swift S0™ UAS (figure 1) and subsequently was awarded a NOAA Phase II SBIR grant to help support the development of a commercially viable prototype. The S0 is now one of three small UAS platforms NOAA is evaluating for use in sampling the lowest and most dangerous regions of a tropical cyclone as part of their hurricane research initiative.  Figure 1: Rendering of the air-deployed Black Swift S0 for use in hurricane research. The S0 was designed to address technical objectives defined by NOAA. The requirements included: Keep the price of each UAS significantly lower than similar platforms to allow for more routine operations and increased use of this technology by NOAA Able to measure 3D winds along with temperature, humidity, and pressure Deliver sea surface characterization using a laser altimeter and thermal IR sensor 1-2 hours of cruise flight endurance Integration with existing radio system used currently for dropsondes in order to stream data back to the aircraft A simple to use interface to pre-program the aircraft Provide intelligent and autonomous sampling where the aircraft can make its own navigation decisions based on atmospheric sensor data. Critical to the success of the S0 UAS platform was Black Swift’s ability to reduce the complexity and weight of the vehicle compared with existing platforms, offering an order of magnitude decrease in cost while maintaining endurance without sacrificing performance and measurement quality. These characteristics proved to be equally valuable in the eyes of the United States Air Force when they announced an SBIR solicitation for development of a tactical weather drone able to autonomously conduct atmospheric profiling supporting more accurate cargo drops and improved localized weather forecasts for Air Force and Special Operations Forces. Unlike the UAS proposed for NOAA, which was a tube-launched variant, the USAF required a vertical takeoff and landing aircraft, yet many of the flight characteristics (such as operations in high wind speeds) mirrored that of the original S0 UAS. The team at Black Swift evaluated their existing design and determined that, with minor alterations, the S0 could address all the requirements that the USAF outlined in their submission. The result is the Black Swift S0-VTOL, a small, ruggedized UAS capable of carrying a variety of different sensors including a full atmospheric sampling suite or small, lightweight EO/IR cameras. While the fuselage remained essentially the same, the wing structure, engine mounts and tail design all were redesigned to enable the new S0 for vertical takeoffs and landings (figure 2). Figure 2: The redesigned S0 with VTOL capabilities. Not only did the Air Force award Black Swift Technologies the SBIR Phase I contract, they were so impressed with the solution proposed by BST that they subsequently awarded them the Phase II SBIR contract to develop their UAS design. The S0-VTOL is an intelligent UAS designed for autonomous flights at altitudes up to 15,000 feet AGL. It’s designed for rapid ascent and descent profiles and has custom wind estimation algorithms to allow the S0-VTOL to quickly and accurately capture 3-dimensional wind profiles. The user interface provides automated sampling patterns and high-level mission scripting all for “launch-and-forget” operations (figure 3). Figure 3: Example flight pattern flown by the S0-VTOL to quickly determine wind speed and direction as well as other thermodynamic parameters at altitudes up to 15,000 ft. AGL. Both variants of Black Swift’s S0 were the result of funding provided through the SBIR program. This program of recognizing and rewarding technology innovation is critical to the growth and viability of small businesses like Black Swift Technologies and serves as a pathway to their future success. Federal Procurement Information The right to receive sole-source awards is a real benefit of the SBIR Program both to the government and to the participating companies. The SBA SBIR/STTR Policy Directive dictates the justification that an agency can and must use to justify the sole-source award. Predictably, that justification reads that the new award must derive from, extend, or complete prior SBIR effort and be funded with non- SBIR funds. To learn more about this technology, please contact Black Swift Technologies directly